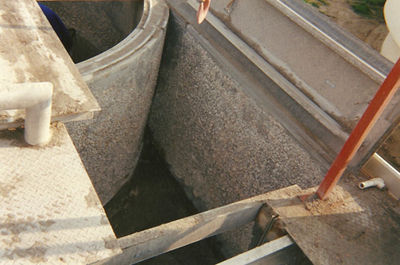 Proper Stablecrete applications render a concrete surface Waterproof and resistant to a host of acids and chemicals. Waste Water Treatment environs are known for bacterial phenomenon’s that plague concrete surfaces. The most common being H2S Desulfovibrio [Hydrogen Sulfide] which becomes airborne to condense on concretes above the liquid line. The Thiobacillus Bacteria thrives in these confines where it consumes the Hydrogen constituent leaving behind Sulphuric Acids on the surfaces. This acid attacks the lime in concrete which binds the material together causing catastrophic damages to the entire structure.

StableCrete will withstand sulphuric acid exposure and can also be used in conjunction with a sacrificial coating as added protection to these surfaces. Coatings applied on top of a StableCrete treated surface enjoy superior adhesion properties and are not subject to internal chemistry of a concrete migrating out to the coating/substrate interface to destroy a bond.