Concretes exposed to Sea Water are particularly vulnerable to Chloride contamination being allowed to penetrate to the depth of embedded steel via the microscopic Gel-Pore / Capillary system. High Chloride concentrations and a low pH of surrounding concrete promote corrosion cells causing the steel to rust and cause spalls which crack the concrete. Conventional coatings and waterproofing membranes do little in providing protection, as they begin to blister and peel from an unprotected concrete substrate, allowing moisture and contaminates to reach the steel. Concretes in the "Splash Zone" are sure targets for corrosion due to the constant wet to dry, dry to wet capillary movement to a matrix that has not been waterproofed. Rust to a reinforcing bar expands the re-bar surface area causing a disbondment of the concrete/ steel interface. At this point the concrete fails under tension with catastrophic movements. 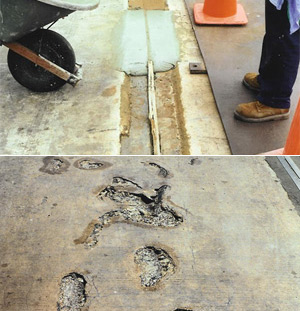 Use Test and use of StableCrete "Bondex" as repair material on existing damaged concrete expansion joints, transition strips and wear surfaces exposed to large tonnage fork lift and steel wheel traffic. Bondex selected over all other products as previous attempts at repairs using other cementitious products have failed Piers are 35 years plus old and have suffered the affects of a harsh saltwater environment. Surface scaling, popouts, Alkali Silica Reaction and physical abuse had taken a toll.

Original expansion joints had been chipped away at the top corners and a repair using angle iron bolted to the concrete to form new corners was employed. Heavy traffic on the joints transferred shock to the attach bolts resulting in another failure. Angle steel was removed, surfaces treated with StableCrete and "Bondex" was utilized as a patch material to reform pier expansion joints back to original shape. Joints were protected by 1/2 inch steel plates for 48 hours then normal traffic was allowed to the repaired areas. Over a period of several years this repair being successful has been repeated a number of times here and similar locations worldwide. 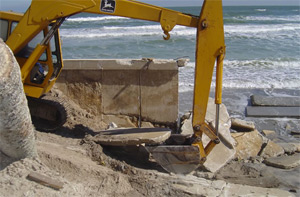 Use Reconstruction of a oceanfront seawall failure during a storm. Entire seawall (600 feet) required replacement after severe corrosion in the Splash Zone Area caused a catastrophic collapse after tides breached the cap. 5’ X 20’ panels cast on site were treated with StableCrete prior to jetting into the sand. New waterproof seawall does not permit moisture and chlorides to enter the matrix causing corrosion cells to be formed. Splash Zone is most vulnerable due to the constant wet-dry cycle on concrete causing more aggressive corrosion on the steel. Use of StableCrete, an EPA Approved penetrating sealer also allowed a colored coating to be applied that has not burned off with alkali migrating out of the concrete compromising the bond of the coating. 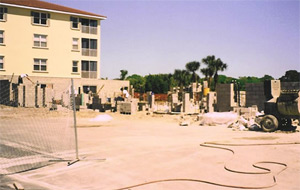 Use Application to all concrete surfaces being constructed for 116-unit oceanfront project. Product specified as corrosion inhibitor and waterproofing sealer to stop chloride penetration and carbonation of new concrete. All subsequent floor covering, paint and tile installations were accomplished with no further preparation of these surfaces except a mild detergent wash to remove surface contaminates from construction activities. 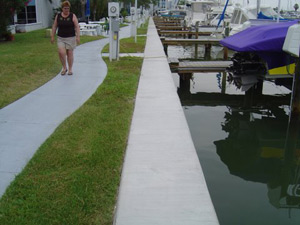